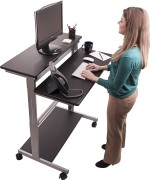 For years, study has shown that the act of sitting is not only counterintuitive to the human physiology, but that it can also cause an array of prolonged health issues. As a common experience, sitting for hours at a time is dreary work. It causes irritation, a lost of interest and a mind that can wonder endlessly. Even those who routinely exercise seem not to regain the comfort in their necks and backs when routinely sitting immobile for hours at a time.

Because of factors like the lack of: mobility, flexion of major muscles groups, and circulation during sitting, the body is likely to incur obesity, type two diabetes or cardiovascular diseases. It is likely that the irritation felt by most sitting at a desk are the underling results of brewing medical issues. Irritability itself is a valid symptom of certain cardiovascular diseases where the body may have trouble circulating proper nutrients – especially when sitting requires very little circulation to accomplish.

It has also been found that those routinely sitting at work practice and invite the same behavior when not working while those who do engage in more physical activities off of work are likely to sustain a future injury. These injuries are the cause of tension built while sitting and the inability of muscles to properly stretch when they are actively engaged. For some, the disadvantages to sitting all week are irreversible.

Because the modern workforce sits up to 77 percent of the time, these factors leave many employees prone to unnatural discomfort and diagnosis. Apart the group of illnesses mentioned above, because the lack of circulation usually found in simple exercises like walking, employees who sit majority of the time are likely to persist with bad posture. Things like bad posture has recently been linked to psychology and a bad self-esteem.

Bad pasture also leads to painful aches resulting from a tightening of muscle groups, that over time, have not been regularly introduced to sound stretching. These painful aches are related to neck and back – due to poor bodily alignment. In a generalized effort to overcome the shortcomings with routine sitting hours, the introduction of stand up workstations has brought a new hope to reversing the negative conditions caused by sitting.

What is a Stand Up Workstation

A stand up workstation is an elevated desk that customizes features which encourages a healthy and elevated posture. These features include space for a computer and other office accessories that are placed conveniently at chest height for the user to stand without need of hunching over or drafting weight to one side of the body. It is a unique approach to working and is garnering worldwide attention for its positive results.

At times, these stand up workstations provide a foot rest that are similar to those found in a typical bar. The objective of this amenity is to direct the body from discomfort and irregularly shifting body weight that has lost a central dispersion point. They can also be customized with steel frames or of choice-cherry wood.

Many are accommodated with adequate shelving below and above the main work space level. These shelves are great for printers, scanners, family photos, CPUs and some basic workstations even come with space diameters larger than others. This allows for the flexibility to use many size monitors for viewing work while standing.

At times, these Stand Up Computer Workstation come with wheels for easy mobility and sturdy but extendable keyboard trays so that the user can be creative with where they position their working angles.

Benefits of a Stand Up Workstation

The benefits to a stand up workstation helps to decrease the diagnosis of diabetes, obesity and cardiovascular diseases. By immediately enhancing the body towards an erect position, stand up work stations aligns one’s posture to the most natural physiological posture best suited for the body. Though so regularly accepted, sitting [especially for long periods] is considered unnatural for the human body and a means of losing positive energy.

The introduction of these workstations into workforces has been shown to dramatically and constantly increase energy and overall vitality with thinking. When answering phone calls or solving complex ideas, the body is able to pace naturally while allowing blood flow in a more consistent pattern. As any worker or employee initiates this method, they are also more likely to practice good posture that is required for the long use [an eight hour work day] of this approach.

Additionally, the erect position taking while using the Stand Up Computer Workstation engages the core muscles of the human body. This in turn allows the overall strengthening and toning of one of the most important muscle groups in the body. For any movement made by the human physique, the core muscles contract one half to one second prior. This is while the extra burning of 1,700 calories a weeks is made using the stand up workstation. It is definitely an overall healthier approach to being stationed while actively working at a computer.

Best Ways of Creating a Routine

Though this mechanism of standing while putting in hours at the computer shows great benefits to that of sitting, this is new to the overall workforce and might be a challenge to accomplish at one’s first attempt. Because of its newness, a gradual introduction must be made and is highly recommended. In order to create a sound routine, it is suggested that a incremental approach of an hour at a time should be made before fully integrating it into one’s work habit.

In addition, the posture taken will also dictate how much a user benefits from this model. This posture requires shoulders to be relaxed, buttocks clinching hips forward and an erect spine. Like any work day, taking five minute breaks now and again is recommended and is ideally to be used as time for walking about. The world is moving toward a better thinking environment and walking and standing will help every worker to do just that.